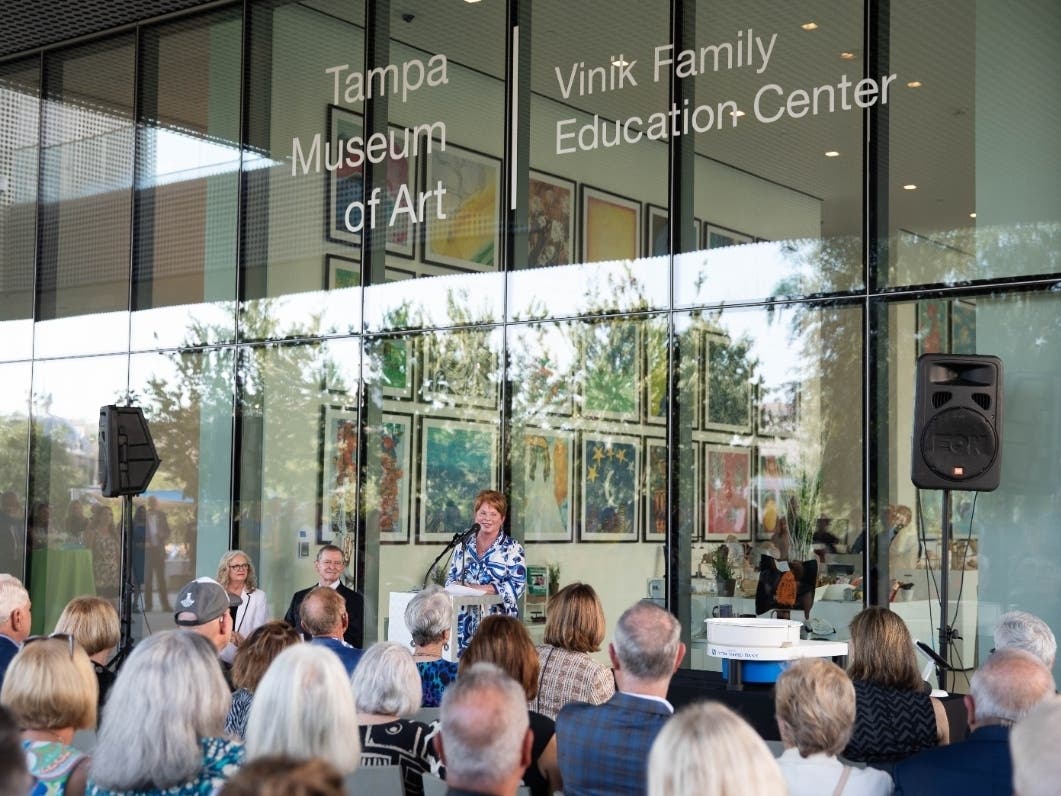 TAMPA, FL – The Tampa Museum of Art has announced that its new education center will be named the Vinik Family Education Center in honor of a $5 million donation made by Jeff and Penny Vinik to the Centennial Campaign of 100 million dollars for the renovation and expansion of the museum.

“The Tampa Museum of Art is renowned for the value of its educational programs and its exceptional support of students and teachers in Hillsborough County. ‘educate, engage and inspire Tampa Bay residents and others around the world,’ said Penny Vinik.

“The opening of our new Education Center is long overdue for museum members, volunteers and other visitors,” said Michael Tomor, Executive Director of Penny and Jeff Vinik of the Tampa Museum of Art. “We are so thrilled to finally have a facility that can meet the demand for our education programs, and we are grateful to the Viniks for their generous donation to help make this facility and future growth possible.”

The Education Center opened on May 16 and will serve as the temporary entrance to the museum while additional renovations are completed on the west side of the building.

The first classes in space will be the museum’s summer art camps for ages 6 to 17.

The Viniks’ most recent donation to the education center adds to a previous donation of $5 million made in October 2019 to staff the position of executive director, bringing the family’s total contributions to $10 million. centenary campaign. To date, including donations from the Vinik family, the Centennial Campaign has raised $71 million toward the museum’s $100 million goal.

After the education center renovations were completed, the education space grew from 1,400 to 8,000 square feet, including four classrooms, a lobby, orientation spaces and a secure entrance.

The museum plans to quadruple the number of students it serves each year, and the school visitation program alone can grow from 6,000 students to 24,000 each year.

In 2021, the Cornelia Corbett Center Museum, 120 W. Gasparilla Plaza, Downtown Tampa Riverwalk, announced it was embarking on its $100 million centennial renovation and expansion to expand the gross area of ​​the museum from 69,000 to 125,000 square feet.

The renovation part of the project is being rolled out, starting with the new Vinik Family Education Center.

The opening of new galleries is planned for the fall and the inauguration of the expansion part of the project should take place at the beginning of next year.

The design of the entire renovation and expansion project is led by New York-based Weiss/Manfredi Architecture/Landscape/Urbanism.

“We are inspired by the Tampa Museum of Art’s expansive commitment to arts education,” lead architects Marion Weiss and Michael Manfredi said in a statement. “We are delighted that the Vinik Family Education Center will be the appropriate and highly visible first phase of the museum’s larger transformation and expansion. These studios and educational spaces will provide bright settings to connect all the arts to the community. widest of Tampa.”

“I’m a lifelong resident of Tampa, and I can’t remember another time when our local arts and cultural institutions have had this much wind at their backs,” said Jerry Divers, campaign cabinet chairman and president of the Tampa Museum of Art Foundation. “This generous donation from the Vinik family, in addition to Dick Corbett’s historic $25 million donation announced last month, is truly transformative for the museum and the community of Tampa Bay.”

“As we embarked on the Centennial Campaign, we made a commitment to students and teachers in Hillsborough County to make it a priority for us to serve them and make museum resources accessible to them for field trips, after-school programs and professional development,” said Dianne Jacob, Chair of the Board of Trustees of the Tampa Museum of Art. “By giving so generously to the new education center, the Viniks have left a lasting impression on the next generation of Tampa Bay residents.”

Founded in 1997, the private Vinik Family Foundation run by the Viniks has donated more than $100 million to nonprofit organizations working in education, social services, health care, and social services. arts. VFF is particularly dedicated to expanding the public’s understanding of art through inclusive and interactive exhibitions and installations.

Under the umbrella of the Vinik Family Foundation and the Lightning Foundation, the Viniks have invested significantly in Tampa Bay-area charities through various initiatives – most notable being the Lightning Community Heroes program, which honors local heroes with $50,000 each for their respective nonprofits. every Lightning home game.

Vinik has ventured into development and over the past several years has pursued his vision of developing 60 acres in downtown Tampa.

In Tampa, Penny Vinik is a board member of the Tampa Museum of Art.

She also chairs a community arts initiative that allows Tampa Bay-based artists to exhibit their work throughout the Amalie Arena.

In August 2016, the Viniks brought Snarkitecture’s “The Beach Tampa” to Amalie Arena. Following the huge success of this installation, they presented “The Art of the Brick Tampa” in the summer of 2017, welcoming over 135,000 guests to experience the art of Nathan Sawaya for free.

Penny Vinik is also at the forefront of organizing the annual Celebration of the Arts, a juried exhibition that showcases the works of hundreds of local and regional artists.

She previously served as an ambassador for the non-profit organization Dress for Success.

Jeff and Penny Vinik moved to Tampa in 2012 after Jeff Vinik acquired the Tampa Bay Lightning hockey team. After more than 20 years in Boston, the Viniks were thrilled to experience the warmth of Tampa Bay, both in weather and in people.

Founded in 1920, the Tampa Museum of Art offers exhibits and educational programs that focus on ancient, modern, and contemporary art.

The museum houses one of the largest collections of Greek and Roman antiquities in the southeastern United States, as well as sculpture, photography, painting, and new media.

Through unique community partnerships, the museum offers outreach programs that provide art therapy interventions and modes of self-expression to vulnerable segments of the population.

Get more local news straight to your inbox. Sign up for free newsletters and patch alerts.