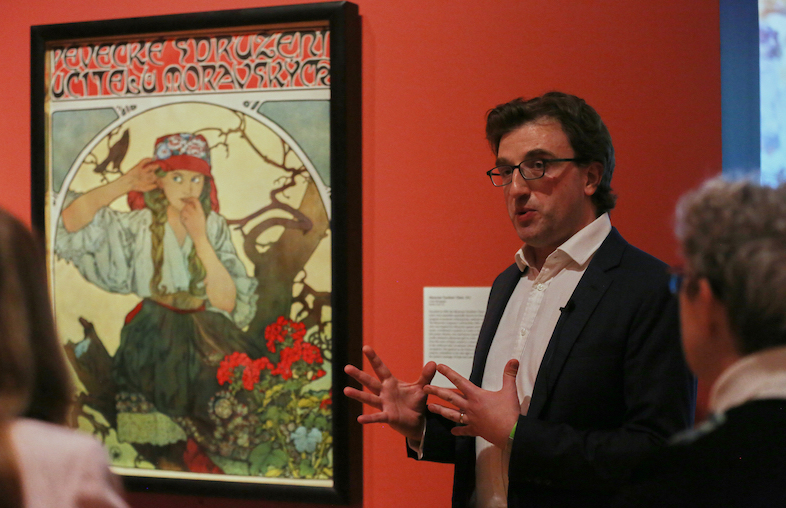 Alphonse Mucha is perhaps the most famous poster designer and decorator of the Art Nouveau era. It was certainly far more profound and prolific than his famous posters, and what it comprised of design, branding and viewer attention has been repeatedly studied and dissected by art students and historians.

The Speed ​​Art Museum is one of two museums in the country to share the exhibition “Alphonse Mucha: Art Nouveau Visionary”. Several of his most famous works are exhibited there until January 22, 2023.

How did Mucha become one of the most sought after graphic designers of his time? A bit of luck, and a bit of legal and cultural change in France.

“When you see something like this, the posters so far have been incredibly popular,” said Kim Spence, Director of Collections and Exhibitions and Curator of Works on Paper, as she presented LEO at the exhibition. “Laws in France changed around 1881. There were these restrictions that forbade putting posters on the walls. You couldn’t put advertisements on the walls. They changed the laws, and all of a sudden the commercial companies and the theater companies…everyone was trying to advertise. They started hiring really good artists because there was this incredible competition where you had to get people’s attention.

Mucha’s compositions were unusual, bold and certainly attracted attention with his large female figures, framed by Byzantine clothing or textures and surrounded by rich flowers.

Alongside contemporaries of the time such as Henri Toulouse-Lautrec, Jules Chére, Eugène Grasset, the American William H. Bradley and the Englishman Aubrey Beardsley, Mucha’s innovations influenced and expanded what would become Art Nouveau.

Alphonse Mucha was a painter born in Moravia, a region of what we now call the Czech Republic, but lived and worked in Paris. When actress Sarah Bernhardt wanted a new poster for her play “Gismonda”, she called on Maurice de Brunhoff, the manager of the Lemercier publishing house. De Brunhoff needed an artist on short notice because none of his regular artists were available. Mucha had seen Bernhardt and had even sketched her in 1890 for “Cléopâtre” for Costume au Théâtre. De Brunhoff contacted Mucha and asked him to design the new poster. Mucha gave them something unexpected and completely new. At the time, Mucha was living with fellow artist Paul Gauguin and living the life of a late 19th century artist, and when he shared the idea with De Brunhoff, the response was not what Mucha expected. De Brunhoff hated him, but he had no choice but to entrust the idea to Bernhardt.

“Alphonse, as he recounts the story in his memoirs, he returned home in the snow feeling like he had missed his chance,” said Marcus Mucha, the artist’s great-grandson. “Imagine, it’s horrible. He entered his apartment and there was a note on the door saying: “Come to the Theater de la Renaissance immediately, orders from Madame Sarah.”

Marcus Mucha and Tomoko Sato, curator of Alphonse Mucha: Visionary of Art Nouveau, stopped in Louisville for the opening of the exhibit at Speed ​​in October. During their visit, with Spence, they discussed many fascinating works and facets of Mucha’s life.

One of Mucha’s innovations was the way her posters were composed, often taking two landscape sheets and making a large vertical that made it look like the actress was standing in the street next to you. It was visually stunning and became a very popular collector’s item among Parisians.

“What would happen is people would go and bribe the stickers to let them take a copy home. Or people would come out with a razor blade, cut the poster and take it away,” says Marcus Mucha.

The Speed ​​has taken great pains to present “Alphonse Mucha: Art Nouveau Visionary”. From the coordinated wall colors and textures used in the exhibition, to the Art Nouveau era elements from the Speed ​​collection added to the exhibition, the public has a dreamy window into the time and mood of Art. Nouveau and the “Belle Époque” of France and Europe at the end of the 19th century, a time before the world wars that would change Europe forever.

The exhibition shows an artist who, although living in Paris, remained very close to his Moravian and Byzantine roots. He often added the motifs of his homeland in his compositions.

“He grew up as a member of a Czech-speaking minority discriminated against in this empire,” said Marcus Mucha. “There were already rumors of some sort of Czech-Slovak independence movement. And there were ways people were trying to encourage the Czech language to come back. It had been banned for a while. There was a sort of Czech nationalist revival trying to bring the language back. Mucha’s Czech roots were very important to him.

Throughout his work, even in the works commissioned by Bernhardt, Mucha managed to draw his heritage and roots from the compositions. Another aspect of Mucha’s work was that his compositions almost always featured women as central figures and portrayed them as symbols of power and strength. He thus gave a feminist tone to his vision of the feminine in contemporary culture.

His work with Bernhardt solidified his fame, but he worked actively with other companies and produced cigarette advertisements like the famous “Job” poster and perfume advertisements, among others, before he began to seek l fulfillment in his work by other means.

He, like many artists, felt that industrialization and mechanization had too much of a place in the world.

“All these Art Nouveau artists reacted and they even wanted to say: ‘Let’s go back to nature.’ And Mucha was completely okay with that. It’s his aesthetic, and it’s also his philosophy,” said the curator of the exhibition, Tomoko Sato.

“That’s what you see in the decorative arts pieces in our collection,” Spence said. “In addition to the Otto Eckmann, you see all these references to nature so characteristic of Art Nouveau. You see it in this beautiful tall Tiffany glass that takes the shape of a tulip.

One of the fascinating aspects of exploring this exhibit was the connections Mucha had with other artists. Tiffany and Mucha actually knew each other.

“A bonus here is that Mucha was friends with Tiffany,” Sato said. “They met in Paris, and when Mucha came to America, he revisited Tiffany’s studio, and there was a record, actually; Mucha could have been commissioned [for] a bit of design.

By 1900 Mucha was at the height of his influence, wealth, and power as an artist, but he was largely unhappy. His displeasure stemmed from the fact that, while Paris was preparing for a world’s fair where he had been commissioned to paint murals for the Bosnia and Herzegovina pavilion, he had learned of the oppression of the Slavic peoples in those regions. Instead of making a political statement, however, he used this mission to celebrate the region’s heritage and cultural diversity. Then, because he was not satisfied with this complete representation of the Slavic peoples, he started his work of 20 panels, “the Slavic epic”.

These paintings are so large that they cannot travel with the exhibition, but they are included in a large video towards the end of the exhibition’s guided tour.

There’s a lot more to this exhibit, but it’s probably best to end with the fact that it’s not to be missed. Mucha’s work is more than decorative and more than beautiful.

Mucha left Paris towards the end of his life. He wanted to be in his homeland, helping his people to seek independence. He died of pneumonia, caught during an arrest by the Nazis. Mucha’s son, Jiří, had fled the area because he was Jewish. When Mucha died, his family had to ask the Nazis to allow a funeral for the artist, as he was a national hero.

“My family, they asked the Nazis to be able to have a funeral and bury him at the national monument. The Nazis said yes, but only immediate family could attend,” Marcus Mucha said.

“We think the idea was that my grandfather would come back and then they would seize him. So my grandfather came back, but rather than listen to the Nazis, over 100,000 ordinary Czechs came and lined the streets of Prague to the National Monument to bid farewell to their national artist, and it was one of the last major public acts of protest before the dark years of Nazi occupation.

Keep Louisville interesting and support LEO Weekly by signing up for our newsletter here. In return, you’ll receive news with a benefit and the latest places to eat, drink and hang out in Derby City.

A look at the intrinsic value of Art Games Studio SA (WSE:ARG)