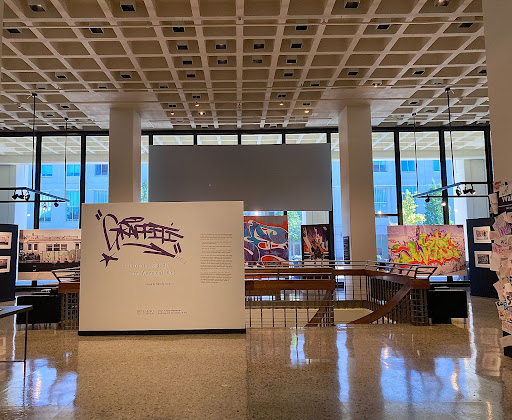 Just as it weaves its way through walls, streets and subway cars to form our cityscapes, graffiti crosses our culture as an aesthetic movement. Whether you view graffiti as abstract self-expression, vandalism, or an intentional work of art, you cannot ignore its prominent and distinctive presence. “Graffiti: An Inside View” was held September 27 in conjunction with the Robert W. Library’s third floor exhibit “Graffiti: A Library Guide to Aerosol Art.” The exhibition features pieces from the Rose Library’s photography collections and graffiti-related books.

The first thing historian Antar Fierce, breakdancer (or “b-boy”) and writer MadClout, photographer HJ Parsons and writer Web One want you to know is that they are not graffiti artists.

“When you call what we do graffiti, you equate it to dirty messages on the bathroom wall,” Fierce said. “It’s very basic, it’s very simple and that’s not what we do.”

They define graffiti in the broad sense, as anything that is written in a public space. “Style-writing” is more specific because it allows the exploration and development of artists’ characteristic styles. They say their work, which they call style writing, is more useful than graffiti.

“When you tell someone you’re a graffiti artist, they automatically think you’re a vandal,” says Web One.

While the exhibition offers viewers an introduction to the art form, the lecture complements the material with a deeper inside look at its world and history through the perspectives of its artists.

Entrance to the “Graffiti: A Library Guide to Aerosol Art” exhibit at the Robert W. Library (Mitali Singh/The Emory Wheel)

Style historian and writer Antar Fierce first became interested in graffiti he saw on the subway in the 1980s. In 1989, when he moved to Atlanta for college, he documented the local scene and launched Steel Wheels, a graffiti magazine, soon after. Mad Clout grew up in the French Quarter of New Orleans, surrounded by expressionism, jazz artists and murals. Despite the remoteness of New York City, where most of the forms were developing at the time, the artistic nature of graffiti fueled his interest.

“It’s definitely a lifelong addiction. And they don’t make drugs for it,” joked Mad Clout.

Atlanta photographer HJ Parson’s cinematic stylistic documentation work dates back to 2013. Web One, a classically trained New York City subway artist, describes his interest as flourishing in an era of hip-hop and breakdancing.

Web One describes how her interest in the art form began to grow and blossom into her career.

“I did my first piece on a train,” Web One said. “Somebody said, ‘I saw your play,’ and I was like, ‘Really? It made me want to go out and do more.

The artists share a deep connection with this art form and wish to share their knowledge of its history. This included clarifying commonly held negative perceptions about the form. For example, contrary to popular thought, style writing came before hip-hop. While style writing dates back to the 60s, hip-hop rose to prominence a decade later. In fact, rock and roll and R&B had more influence on early graffiti than hip-hop.

They describe hip-hop as an umbrella movement encompassing the artistic frenzy of the late 70s and early 80s, a time when MCs, DJs and break-dancers came together.

“So hip-hop is really an approach to classic artistic disciplines like music, dance, visual arts, those things that we couldn’t get in the school system.”

Speaking of contemporary impact, Web One said he was surprised at how graffiti has spread from New York to other places like Los Angeles.

The artists emphasized the role of photography and documentation for their archives, as proof of their creative mark when the trains stop. When they were kids, they were more concerned about chasing trains around the city. Now, years later, they keep their archives handy and appreciate their value. Trains, they are both writers and conductors – the two words conjure up images of freedom.

“Exchanging images for writers is like exchanging baseball cards,” says Web One.

After the conference, the artists lingered in the gallery to discuss with the spectators the exhibits. DJ Nervex played tunes in the background, inspiring an energetic dance fight by some viewers while others tried their hand at writing style they could add to a “Wall of Fame” display.

A strong feeling shared among the three style authors is the inescapable appeal of the art form.

“It kind of hits you and sucks you in.” Ferocious said.

Web One added that graffiti is “almost like a drug”.

“It’s just something you do from the heart, and I’ll never stop,” Web One said.

In the exhibition, I find myself stepping into an installation piece several times that recreates a New York City subway car accompanied by the sounds of the subway and graffiti art.

The auditory elements play on a loop, reminding me of the continuity of this art form.

The art form is alive and these artists are determined to make it flourish both for the younger generation and for themselves.

A Tumblr Era Reborn: The Resurgence of Indie Aesthetics