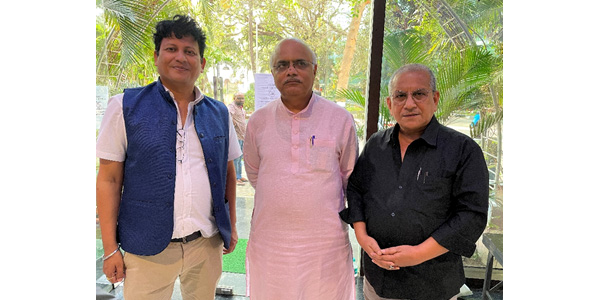 Mumbai: Indian films need a strong aesthetic identity. According to Utpal Datta, a leading film critic in India, a fragmented or divided identity will not strengthen the identity of Indian cinema. A collaboration between the ICCR and the Flame University of Pune organized a national seminar on Indian cinema and soft power, of which he chaired one of the five sessions. Bharat Bala, Subhash Ghai, Aruna Raje Patil and Sameer moderated the other sessions.

The seminar was held on May 3 and 4, day one at Raj Bhawan and day two at Film Division’s JB Hall.

The objective of the seminar was to explore the potential of cinema as soft power in a global context through five sessions. Topics covered included “Global and Indian Cinema through Western Lenses”, “Indian Cinema Abroad as a Means of Understanding Indian Culture”, “Regional Cinema and its Global Influence” and “Cinema Engagement India with foreign audiences and advanced technology”.

Utpal Datta chaired the session on “Regional Cinema and its Global Influence” with panelists including GP Vijay Kumar, Sashikiran, Santosh Pathare and Pabitra

Daisy. Utpal Datta said, “We mainly confined the expression REGIONAL CINEMA to the Indian context. In a broader sense, regional cinema refers to films made in regional languages. For most foreign viewers, Indian cinema is divided into three basic categories: Bollywood cinema, Southern cinema and film festival cinema. Bollywood cinema and cinema in South Indian languages ​​are popular overseas. Film Festival films are still considered a different genre and the audience for these films is still limited.

Explaining the term ‘Influence’, he said, ‘Influence is an abstract idea with visible effects’ and the unique phrase immediately caught the audience’s attention.

He added – ‘The question is – how will Indian film achieve this level of capability to be a strong player in the global cinema arena? He continues: “Indian films will need a strong identity. A fragmented identity or an identity divided into several quarters with a sub-identity will not strengthen Indian Film’s identity. My comment might offend some members of our fraternity, yet I say that Indian Film has yet to create a respectable identity on a global scale. Foreign films inspired Dada Shaheb Phalke, as he learned the craft of filmmaking in Europe, and made his films with Indian content and Indian sensibilities. India has a strong artistic tradition; India is a country of artists and art practitioners in the visual and performing arts. The identity of Indian film should have been shaped with the aesthetics of traditional art forms fused with machine/technology based equipment.

Once Indian Film has a single identity, it will fight for a place in the global market. The market is nothing but a battlefield. You have to fight to find a place, then another battle immediately begins for survival.

In the book Marketing war, Al Rice and Jack Trout had rightly said that he wins in a battle who can use the latest equipment. This comment is equally valid and applicable in the war for power. On the occasion of the digital revolution, a platform like Film freeway appeared and changed the grammar of film festival registrations. The same thing happened in the distribution of films with UFO and other actors. OTT platforms like Amazon, Netflix and others are also changing the game. Amazon Netflix not only exhibits movies but also produces. They produce films according to their needs, and now they have created a new narrative for the films.

Becoming a soft power is not only a market game but it is a philosophy, an ideology and it is the identity of a country. Ultimately, we are selling a product, but we are also displaying our country’s pride and honor to the world. The creator who loves his own country has this SWABHIMAN and will think about the image of the country. Others are offerers or product sellers.

A few sensitive and country-loving filmmakers believe that the government should not promote such films abroad or domestically, which show an underdeveloped India with many tribes living in remote areas and living in the amidst superstition, hunger and poverty. India has so many stories to tell the world. It is time for the government to promote films that tell a story of tradition, values ​​and development mixed with humanity in the language of film.

Utpal Datta’s latest book, “Film Appreciation,” is doing well among students and moviegoers around the world.

The lack of artistic education to the detriment of students