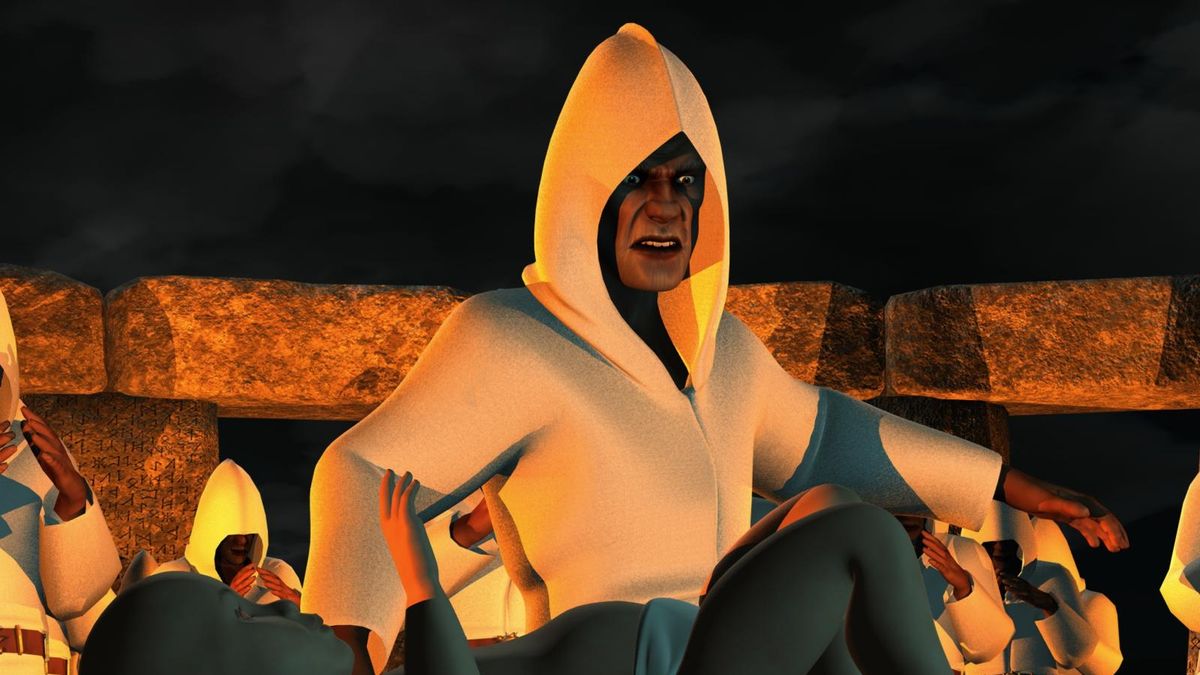 Jankcore is the new aesthetic

Shortly after starting The Druid Mystery, my caustic detective character, Brent Halligan, steals money from a tramp after mixing medical-grade ethanol in his flask. Once the guilt subsided, I put my little moral mishap behind me, and over the next few hours realized I was playing a work of art: a rich point-and-click assortment of glitches, gorgeous backgrounds, 90s desktop devices, and painfully obtuse puzzles, all covered in generous helpings of cheese. Later, I was forced to find a patch to fix a game-breaking bug during simple dialogue. No problem. Nothing would prevent me from seeing the story of Halligan, an ugly little wretch in a trench coat, through to the end.

“It’s less about nostalgia and more about the cycle of their actual creation,” says Vohyak, a content creator who runs the popular low poly depression (opens in a new tab) account on Twitter. “They don’t feel like commodities and more like obscure love projects that have built cults.” Vohyak, who works full-time in games (and prefers to keep his online persona separate), posts a mixture of vaporwave-tinged homages to cult games (opens in a new tab)fashion videos, old game ads (opens in a new tab)memes and trivia (opens in a new tab).

He is drawn to games whose idiosyncrasies are a product of their time. For instance, Levitating Lowry (opens in a new tab)as developer of Mystery of the Druids Martin Gantefohr (opens in a new tab) dubbed one of the game’s most distinctive issues, which basically stemmed from the fact that each scene was a 2D rendering of a 3D scene. Performing this ancient magic on modern computers, Lowry, Halligan’s sleazy colleague, floated above his seat.

The low-poly, blockish aesthetic of old games from the 90s has been kept alive in large part thanks to lo-res indie horror communities like Haunted PS1. But there’s more to celebrating than just a date visuals (opens in a new tab). “The 90s were a really tough and dark time for gaming and it seemed like everyone was experimenting and trying to do their own thing,” says Vohyak. “A lot of people still don’t know that Resident Evil was inspired more by Night Trap than Alone in The Dark and that’s something I like to introduce people to.” Night Trap became a cult classic not only because it was one of the first FMV games, but also because of the way it combined the gratuitousness of B-movie humor with the themes and writing more adult-oriented adventures to come. (It’s also really bad.)

Not content with celebrating old games and the unique time bubble they existed in, a few modern developers are taking a page of outdated adventures for their own work. bodyepile (opens in a new tab)a amateur developer (opens in a new tab) from Minneapolis, spends weekends working on a point-and-click horror adventure inspired by late ’90s FMV Sierra (its working title is Rust Valley). As a child, his fascination with FMV games intensified when his family spent a year in Singapore. “The only gaming machine we had overseas that year was my father’s laptop,” he recalls, detailing his early experiences at Sim Lim Square, where my own father took me as a child. watch games. Sim Lim was the heart of CD-ROM piracy at the time (opens in a new tab)where you could get the latest software at a fraction of the price, until the government cracked down on the vendors.

“FMV/point-and-click adventures… were the most technologically and visually impressive games at the time,” says Corpsepile, who uses his online username to separate his development work from his offline life. . “When it comes to some of my favorite games in this genre, I would say off the top of my head Myst, Riven, Escape From Horrorland, Shivers 1 and 2, and The Journeyman Project games.”

For Corpsepile, this fleeting period of pre-rendered scenes and clumsily sprinkled FMV created a unique time capsule. “For me personally, the main draw is the nostalgia,” he says. “The overall vibe and time frame…reminds me of things like staying up late at a sleepover in a dark room and being scared with a friend, or having my dad and brother huddled around the laptop trying to help solve a riddle.” These games, once considered technical marvels, are, in a modern computing context, now associated with flaws and failures. Seen from another angle, their fascinating imperfections make them windows into the evolution of gaming technology.

Vohyak and Corpsepile love glitches because they are reminiscent of the people behind the game. For Corpsepile, the experimental nature of 90s games, especially FMV games, went hand in hand with goofy, cheesy dialogue and a sense of humor. For Rust Valley, he plans to grab random friends with no acting experience and throw them into the melting pot, and play around with recreating problems and design choices that usually stemmed from old technical limitations. “Like a lot of games having a bigger UI, so they can compress videos to a smaller resolution,” he says as an example, “or hard audio cuts in audio files for entertainment purposes. “Saving memory. It’s really fun for me to pick out those details and recreate them, because other people who remember those games always seem to notice them too.”

Of course, the 90s didn’t mark the end of these charming little abominations of adventure – fragments of incipient 3D design and grumpy bugs carry on into the 2000s as nagging reminders of an empire in decay. I spent a lot of time the other day having fun with Indiana Jones and the Emperor’s Tomb, a 2003 LucasArts experience that’s way more fun than it should be. Even newer games like 2013’s Detective Mystery Black face (opens in a new tab)which had a terribly written plot (and one of the most racist portrayals of a Chinese I’ve ever seen), had some of the nicest backgrounds and silly glitches in a point and click since… well, Mystery of the Druids.

I firmly believe that janky games are God’s favorite children, not only because they are glimpses into an age of remarkably experimental technical choices, but because playing them is an act for posterity. There’s a whole generation of bug-ridden, beautifully outdated worlds out there ready to be rediscovered, if you’re willing to work a little to bring them into the 21st century. For the curious, here are some suggestions to get started.

Phantasmagoria: A Puzzle of Flesh (1996)

The sequel to Phantasmagoria is by far the superior game (sorry, Adrienne faithful) when it comes to atmosphere. It’s got everything you want in an extremely grown-up mid-’90s FMV – a relatively unbalanced relationship with the modern office, hilarious and unfunny depictions of sanity, the cheesiest jokes, a completely milquetoast white protagonist who doesn’t deserve half the cool stuff that happens for it, and an amazing final act filled with some of the best computer art Sierra has ever released.

Here’s one that was actually a decent hit when it was released – a one-off space adventure written by acclaimed sci-fi/fantasy writers Roger Zelazny and Jane Lindskold. There’s a nice clash here between cartoon graphics and pseudo-3D models that prove both dated and delightful. Did I mention that protagonist Korda is voiced by a very low-key Ron Perlman? My favorite moment is when I realized that the magic sandals I had traded with a merchant were actually unbranded Birkenstocks.

Some might swear by Zork Nemesis (boo), but Zork Grand Inquisitor is where it’s at. The gameplay is simple (and the 360-degree camera, which was first implemented in Nemesis, is much better calibrated to not induce nausea), it’s goofy, it’s fun, and it’s designed by Margaret Stohl, who has arguably one of the most incredible portfolios in the business. (She wrote Dune 2000, a few Command & Conquers, Destiny 2, and the Beautiful Creatures YA novel franchise). The mix of pre-rendered graphics and FMV, complemented by outstanding performance from its entire cast, makes it the most charming Zork game in my book.

Many people have fond memories of the original Journeyman Project series (with good reason), but the Pegasus Prime Remake (opens in a new tab) is reserved for masochists. It’s clunky, it’s a huge pain in the ass to do even the smallest of tasks, and all of the interfaces in the game are incredible relics of a time when UIs actually had personality. The screen freezes for no reason? Yes. Did that deter me? No. Some of the solutions and little key pieces are horribly unobvious, but the suffering is part of the experience.

It’s hard not to mention Harvester, which caused a stir with depictions of gore and violence unprecedented in video games – a deliberate part of writer Gilbert P. Austin’s meta commentary on violence in fiction. While much of Harvester’s retrospect devolves into rosy hyperbole, revisiting it in a 2020s context is rather different. It’s extremely heavy, it can get really gross, and features a slew of goofy, offensive ’90s humor that Austin wanted — with varying results — to use in an era of pearl panic around video games. If you’re looking to find out what it was all about, then Harvester is an ideal historical artifact. It’s also not for everyone.