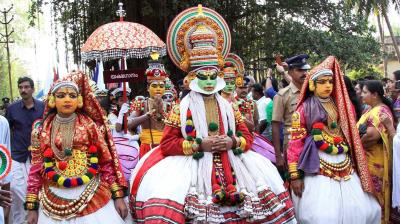 Kerala Fair showcases the arts, crafts, culture and cuisine of the state

“The response to the show has been quite encouraging,” said a Kerala government information official.

Bombay: The Kerala Culture and Trade Fair, which started earlier this month at CIDCO Urban Haat in Belapur in Navi Mumbai, will end tomorrow with a show on 60 years of the state, after drawing large numbers of visitors to the event which showcased the best of the state’s art, crafts, culture and cuisine.

“The response to the show has been quite encouraging. Not only Malayalis but also people from all parts of the country residing in the mega-city have shown up in the past nine days,” a news official said. of the government of Kerala.

The show, organized by the State Department of Information and Public Relations with the support of Malayali associations in Mumbai, was opened by Kerala Minister of Labor and Excise TP Ramakrishnan on January 20. .

A wide array of artifacts and memorabilia like replicas of Kathakali masks, snake boats (chundan vallam), off-white hand-woven textiles, traditional delicacies and donuts were on sale at the fair.

In addition to the food stalls of the â€œKudumbashreeâ€ women’s self-help network, the exhibition also had outlets selling spices, coconut candies and coconut products.

The book stands set up by some of Kerala’s leading publishers have also been well received from visitors, organizers said.

In addition to the scenic programs, performed by troops from Kerala as well as by members of Malayali associations, writing and drawing competitions for schoolchildren were also organized.

This is the second edition of the event held in the suburbs of Mumbai, seeking to bring the rich culture and traditions of Kerala to all sections of the population of the metro and its adjacent areas.

3 Reasons to be an Arts Education Major