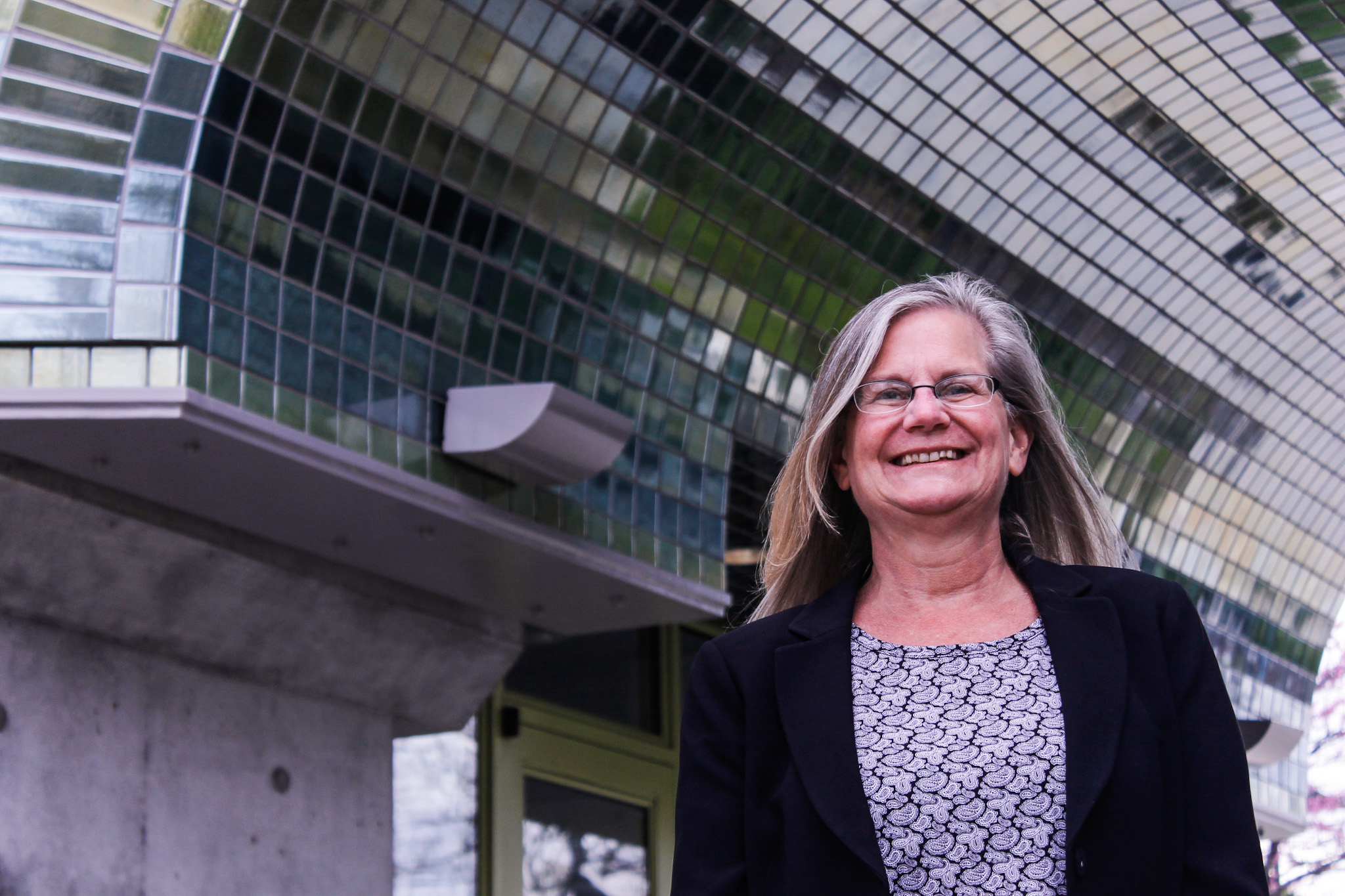 Editor’s Note: In an earlier version of this story, Kevin Wanklyn’s name was misspelled. The College student regrets this error.

Twenty-six years ago, a young woman left her museum career on the East Coast to be part of Manhattan history. She joined the staff of the Beach Museum of Art before it opened on October 13, 1996, and has been an advocate for arts education in the region ever since.

Katherine Schlageck, associate curator of education, never really saw herself returning to the Midwest to settle down, but the prospect of creating something from scratch appealed to her.

â€œThe idea of â€‹â€‹being on the bottom floor of a project and really building an education department that I totally believed in, using interactive ideas and stuff like that,â€ Schlageck said, â€œ.. it was a chance to really build a dynamic program for an art museum.

Schlageck arrived in January 1995 and began to develop a thriving arts education program that, 26 years later, resonates with museum enthusiasts, the campus and the local community.

However, working in a museum was not something Schlageck envisioned when she majored in history at Stanford University in the mid-eighties. Although museums have always been a part of her life, she believed that working in a museum was not a practical way to earn a living; However, her perspective changed in her freshman year of college when she worked in Washington, DC, for Kansas Senator Nancy Kassebaum.

A tour of the Capitol opened Schlageck’s eyes to museum work as something practical when she saw the art curated by Clement Conger in the booths. The experiment stayed in his brain and planted the seed for an idea that continued to flourish during his final year of college.

The idea came true when she returned home for the Christmas holidays of her senior year.

“I think my dad kind of felt like I was a little lost and I was a history student, so I started to think, ‘Well, maybe I’ll go to the education program. and get my masters in education, â€Schlageck said. â€œHe said, ‘If you could do whatever you wanted and didn’t have to be practical, what would you do?’ And I said, “work in a museum”, and he said, “Well, then do it.”

Two years later, she graduated from the College of William and Mary with a Masters in Museum Studies and began her career.

After graduation, Schlageck accepted a position with the Nantucket Historical Association, creating educational programs for Nantucket schools. Her subsequent positions have focused on education and nurtured her passion for objects.

“I think at that point what I really understood about myself was that I liked the objects, but the reason they were important to me was what I could share with them. people and make connections, â€Schlageck said.

Making connections between people and works of art became a reality when she accepted a position in Connecticut that had both an art collection and a collection of historical objects. The constantly changing exhibitions have excited her and ignited her passion for working with art. Her experience there eventually brought her to the Beach Museum because she loved the challenge of constantly creating something new for people.

The Beach Museum’s arts education program is an original idea of â€‹â€‹Schlageck, but its growth and sustainability has developed with the help of a group of others – students, volunteers, other vocational education staff. and his team.

Kim Richards, teaching assistant, started at the museum in 2004 as a guide. Over the years, the two have worked closely together to develop arts education programs.

Richards said Schlageck is supportive of her no matter how busy she is during the day and strives to help her team develop their ideas and make them work.

â€œThere’s always just that bounce and that feedback,â€ Richards said. â€œShe’s there a bit; we bounce back and forth, and it keeps us organized and always busy. She always supports and encourages new ideas.

Schlageck also values â€‹â€‹ideas presented by students who work or volunteer at the museum and provides them with opportunities for growth.

Former student Rachel Lord, who worked at the museum while studying for her BFA, said Schlageck offered her the opportunity to teach in the Young Artists program. This opportunity changed her life.

â€œThe part that she played in my life for those two months was really crucial for me because before I always thought ‘I’m just going to be an artist’, I’m going to paint, you know, sell, all these types of things. things, â€Lord said. â€œBut when I started teaching in the classroom, it was like a whole new thought opened in my head and the doors opened, and I got really passionate about itâ€¦ I probably wouldn’t even have to. not that thought to date if it wasn’t. for Kathrine who offered me this position.

Other people in her life also notice Schlageck’s generous spirit and willingness to reach out to support or recognize the strengths and talents of those she meets.

â€œShe takes everything to the next level,â€ Smith said. “She wants [you] know that you are seen that you are recognized [and] that what you do makes a difference. And having that quality in both a friend and a coworker has been truly phenomenal over the years. “

The Beach Museum hosts a virtual exhibition of Two by Two: Animal Pairs

Kevin Wanklyn, an associate professor of nuclear engineering, whose children Lilla and Jonah attend arts education programs, agrees that Schlageck’s concern for others is genuine.

Wanklyn said Schlageck greeted him whenever they passed each other in Dillons.

“She would see me and she would say, ‘Hey, say hello to Jonah and Lilla,'” said Wanklyn. â€œIt’s not a job for her. Seems like it’s a passion for her, and she wants to keep connecting with people. It’s not like, ‘Well I’m not in my Beach Museum, I’m not wearing my Beach Museum hat, so I’m sorry, uh, you’re not part of my life here’, she pulls together everything and tries to make you feel like you are a part of its orbit or its existence wherever you are.

Richards said Schlageck’s openness and generosity with his time, support and resources amazes him.

â€œShe’s just been a great mentor,â€ Richards said. “And I’m always amazed at how kind he is with sharing all of these things.”

However, Schlageck’s generosity goes beyond the museum. She runs the Monday sessions at the Flint Hills Summer Fun Camp for children with the autism spectrum, developed an online art program for daycare educators, and does broad outreach in local schools.

â€œI’ve had her for about three years, not since COVID, but for three years in a row she would pick one day and she would come and teach my classes all day,â€ Smith said. â€œShe would say to me, ‘What grades do you have? Okay, I’ll bring some stuff. Do you want to do this? Does this sound like fun? Have you done this before? ‘ And she just brings all the supplies, and we teach as a team, and the kids make the connection because they saw her at the museum.

Schlageck strives to make connections in everything she does for the museum, and the human aspect of her position is key to her enjoyment at work.

â€œI guess what makes me feel good is when I can help someone see something new or understand something a little differently,â€ Schlageck said. “I like to share these experiences with people.”

Schlageck shares his artistic experiences with a wide range of campus members and the local community.

â€œI think one of the wonderful things about this museum is that there really is a place for everyone,â€ Schlageck said. “We’re kind of joking in my department that we work with people between the ages of 2 and 102.”

Serving such a wide range of museum visitors makes his job challenging, exciting and charged.

Richards said Schlageck is constantly busy working on a variety of projects at the same time. Most of the time, she’s already in his office for a few hours before Richards even arrives.

Juggling with meetings, exhibitions, classes, tours for the current semester, Schlageck also spends his days working on projects six to nine months ahead.

â€œThere’s always just this cacophony of activity going on around her, and I’m doing my best to dive in and keep up,â€ said Richards. â€œI told someone the other day that I was just feeding off the energy from their turbine. I mean, she goes there constantly.

Schlageck’s frenetic pace extends beyond the walls of the museum into his personal life. Outside of work, she said she enjoys cooking, reading, gardening, â€œquitting and startingâ€ various creative projects, and listening to music. She enjoys experimenting in the kitchen and enjoys cooking and trying new dishes.

â€œThe only thing, I’m not the best baker in the world,â€ Schlageck said. â€œI have to follow the instructions too carefully. I want to add some other stuff and sometimes it doesn’t work.

However, mixing disparate components for a recipe that works is part of what makes Schlageck so good at his job. His collaborations with outside entities offer a mix of experiences to museum visitors and give them a taste of something new and rich.

â€œThe last 10 years of the museum have really focused on this idea of â€‹â€‹collaborating andâ€¦ truly being part of the community, whether it’s the college community or the Manhattan community,â€ Schlageck said.

The Dan and Beth Bird Arch is a symbol of the museum’s continued dedication to community engagement.

â€œThe idea for this arch was to really create a walkway, just around the corner from campus,â€ Schlageck said, â€œand so the idea was to have this walkway to be this place where the community and the campus connect. It took a while, but I think we’re doing it really well, and I think it’s a good thing about us that maybe makes us different from other university art museums.

Schlageck said living in Manhattan for the past 26 years allowed her to see the museum fit into the community’s vernacular and was impressed by the connection between the museum, the campus and the local community.

â€œAt this point, I think Manhattan would feel really weird without the museum,â€ Schlageck said.

The museum, like Schlageck, is not going away anytime soon. With a son starting medical school, she said retirement was not on the horizon.

“Sooner or later I will have to go,” Schlageck said. â€œI still have plenty of ideas to work on, so I’m not ready yet.

IPad is great for art, games, and movies. Apple wants it to be more