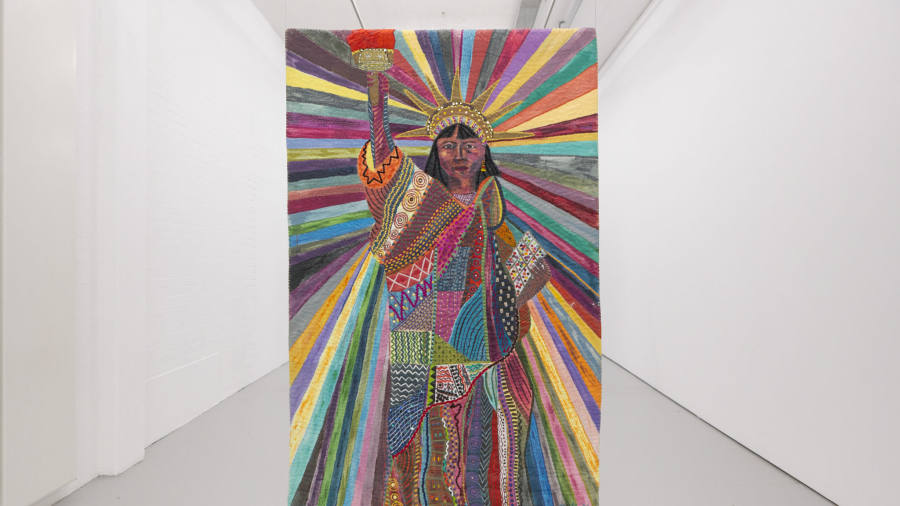 Pacita Abad in Bristol: where art, craft and politics intersect

If Pacita Abad had been Italian, she would have been described as a forza di natura. In truth, she was born in Batanes, an archipelago in the northern Philippines. By the time of her death in 2004, she had painted over 1,000 canvases and traveled to over 80 countries, many of which borrowed local artistic techniques.

As a result, her art is a captivating and provocative broth that encompasses painting, sewing, embroidery, batik, macrame, Korean ink brush and a myriad of other practices. Yet he still maintains both formal discipline and political intent.

Kudos to Spike Island in Bristol for giving Abad his first public screening in the UK. The title of the exhibition, Life on the fringes, is not entirely correct. Abad’s work was widely disseminated during his lifetime, in countries as diverse as Singapore, Cuba, Bangladesh, the United States and his homeland. But the fact that her activity took place mostly on a Southeastern axis – when she exhibited in the United States, it was usually in the context of her ethnic or gender identity – reveals the neglect of institutions in the Northwest. which so often define themselves as the epicenter of global culture.

The exuberant majesty of Abad’s canvases underscores the folly of such a guardian. Life on the fringes opens with a suite of works from the 1980s. Abad was now married to an American economist, Jack Garrity, whose work involved frequent travel. Partly thanks to Garrity’s career and partly by her own will, she had previously traveled through countries such as Hong Kong, Bangladesh, Thailand, Taiwan, China, Papua New Guinea and India. .

Her experience with the different arts and crafts in these regions inspired Abad to develop a practice she called ‘trapunto’, a quilting technique that involved painting and gluing onto a canvas that she then backed up, stuffed and sewn. . The results are scintillating, tactile cornucopias of paint and textile which are then decorated with beads, seashells, buttons, macrame and found objects.

In â€œGrasshopperâ€ (1985), the abstract motif of plunging arabesques in fern green, indigo and turquoise evokes from afar the smooth and lively leaps of the insect in a tropical jungle. On closer inspection, however, the surface is chock-full of a rainforest of ingredients, including buttons sewn by Abad and then painted, a gesture that tells us how much the artist loved to push his style further. its maximum.

Abad’s passion for social justice injected skills often dismissed as decorative with a deeper, darker sensibility. Made in 1983, one of Bristol’s most prominent works is â€œGirls in Ermita,â€ which shows sex workers in the red light district of downtown Manila. Painted on a stitched and quilted fabric, her fiery palette – deep reds, lemon yellow and orange, warm sky blue – intensifies the melancholy aura of the half-naked female figures that float on either side of a central strip of sticky signs with legends such as â€œHave a Peep Discoâ€ and â€œOld Vienna.â€ The presence of these brown bodies, which Abad makes both vulnerable and provocative, highlights the objectification of women of color in the global south by painters like Gauguin, who romanticize their subjects’ lack of power rather than questioning it.

Sharp critical faculties were in Abad’s DNA. Born into a family of politicians, she was expected to follow in the footsteps of her father, Congressman Jorge Abad. But after leading a student protest against President Marcos’ corrupt elections, his family home was attacked by gunmen. Fearing for her life, Abad left the Philippines in 1969 and moved to the United States, where she would settle for the next 30 years.

In the 1990s, Abad embarked on a work entitled Immigrant experience, in which she shed light on the experience of migrant communities transplanted to the land of opportunity. In “Korean Shopkeepers” (1993), for example, she paints in her signature vibrant shades on textile to show grocers standing at a counter laden with mouth-watering fruit, including strawberries she fashioned from papier-mÃ¢chÃ©. and a pineapple whose translucent glow comes from yellow glass beads. By making such painstaking efforts to build the scene, Abad shows empathy and respect for those she represents. These bold three-dimensional digressions reflect his determination to transcend a purely superficial representation of his subject.

Abad had no illusions about the ambiguity of the welcome offered by his adopted country. The gap between expectation and reality is expressed through paintings such as â€œThe Village Where I Come Fromâ€ (1991) and â€œIf My Friends Could See Me Nowâ€ (1991). In the first, Abad brings to life a vibrant rural community in the Philippines, with a nursing mother, cooks, fruit pickers, merchants and goats. Overseeing their activity is a glorious tree whose flower foam has been assembled from rose-pink buds.

The second painting is a sadder, more tense affair. There is only one figure, possibly Abad herself, standing at the center of an arrangement of storyboard-style images. Frowning, arms folded across her chest, she is clearly disappointed with the American dream – that weary shot is painted in big black letters above her head – of skyscrapers, palisades and automobiles.

In 1998, Abad was living in Indonesia, where she witnessed the fall of the Suharto regime. To capture the meaning of chaos – from currency collapse to devastated architecture – she returned to abstraction when she painted “The Sky Is Falling, The Sky Is Falling” (1998).

Two years later, she embarked on a series called Endless blues, which she paints while listening to the blues that she loved. The turbulence of this late series – here embodied by “Life in the Margins” (2002), “Blues Train to Yogya” (2002) and the imposing five meter high “Fly into a Rage” (2000), which is hanging in the center of the gallery – is intensified both by the trauma of the attack on the Twin Towers and by Abad’s diagnosis of lung cancer.

Using the batik technique she learned in Indonesia, Abad created canvases whose vibrant colors and compressed, kaleidoscopic patterns express grief of extraordinarily fruitful intensity, as if the canvases were both a celebration and a celebration. elegy.

Abad died in Singapore in December 2004. After accepting a commission to paint the Alkaff Bridge in that country, her final months saw her undergoing radiation therapy in the morning and working furiously in the afternoon. Her legacy was eloquently evoked by black American painter Faith Ringold, who said: â€œAbad creates her work from the perspective of an international woman of color. Those of us who have traveled extensively know that creative women of color work all over the world and are not simply “minority” figures within the narrow confines of the Western art world. “

Thanks to Abad’s broad horizons – both as a woman and as an artist – we leave this show with our own enriched and expanded borders.