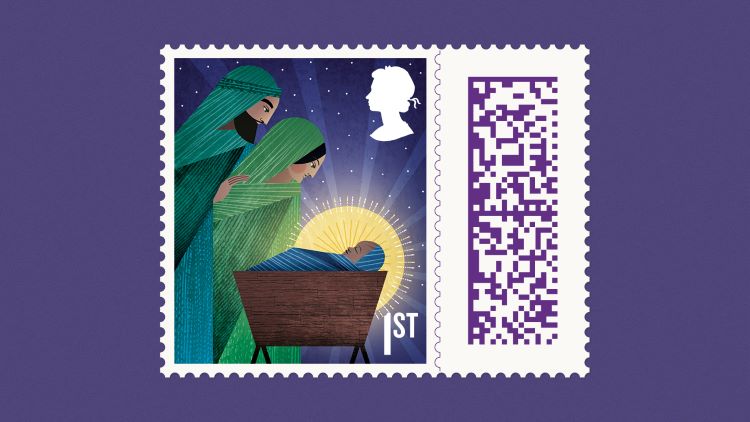 Brighton-based studio Baxter & Bailey led the project and worked in collaboration with Kent-based illustrator Katie Ponder on the set of six stamps. They also created the presentation file, the mini sheet and the first day cover.

The studio’s creative director, Matt Baxter, says the “colour approach and vibrancy” is a response to Royal Mail’s brief, which was to create something “jewelry-like”. He adds that the design team looked to various illustrators, but identified early on that Ponder’s “colorful style” and use of “clean graphic forms” fit the brief perfectly.

Although Ponder’s work is contemporary and entirely digitally produced, there is also evidence of a “traditional, gothic art deco influence”, according to Baxter & Bailey design director Rory Brady. He adds that his style is a “striking and original” way to tell the nativity story.

Inside each stamp is a central point of light, like the Angel Gabriel in the first and fourth stamps and the Star of Bethlehem in the fifth and sixth stamps. Baxter says this was a deliberate design choice and that each stamp should look like “light is emitting”.

The story of the nativity is told chronologically across the six stamps, beginning with the visit of the angel Gabriel to Mary on the 2nd class stamp, which will be used the most, and ending with the three Magi presenting their gifts. on the most expensive stamp. The way the figures face the far left and far right of the stamps “clamps the setting,” Brady says.

He adds that a “definitive lead color” has been chosen for each stamp to be used for the accompanying QR codes.

Baxter explains that one of the studio’s challenges was to “condense a long story into six key scenes” that would communicate the narrative well. He adds, “It’s also tempting with the design of the stamps to enlarge them to a larger size on the screen and work them that way, but we encouraged Ponder to see them in actual print size.”

This ensured that all “small components,” such as the head, value, and design elements, were distinctive at their actual size, Baxter explains.

Traditionally, Christmas stamps alternate between a nativity-themed set and a secular set from year to year, however, last year’s stamps designed by Supple Studio also depicted a nativity scene. Baxter says, “Our set took a more graphic, brighter approach to the last few years, which adopted a painterly style.”

Baxter & Bailey worked on the project for 18 months. “A phenomenal amount of time, effort, and discussion” went into it, given its “physically tiny output,” according to Baxter.

The Christmas 2022 stamp set and accompanying materials are now available for purchase.

My favorite pieces: Mo Coppoletta has an eye for the aesthetics of watch brands