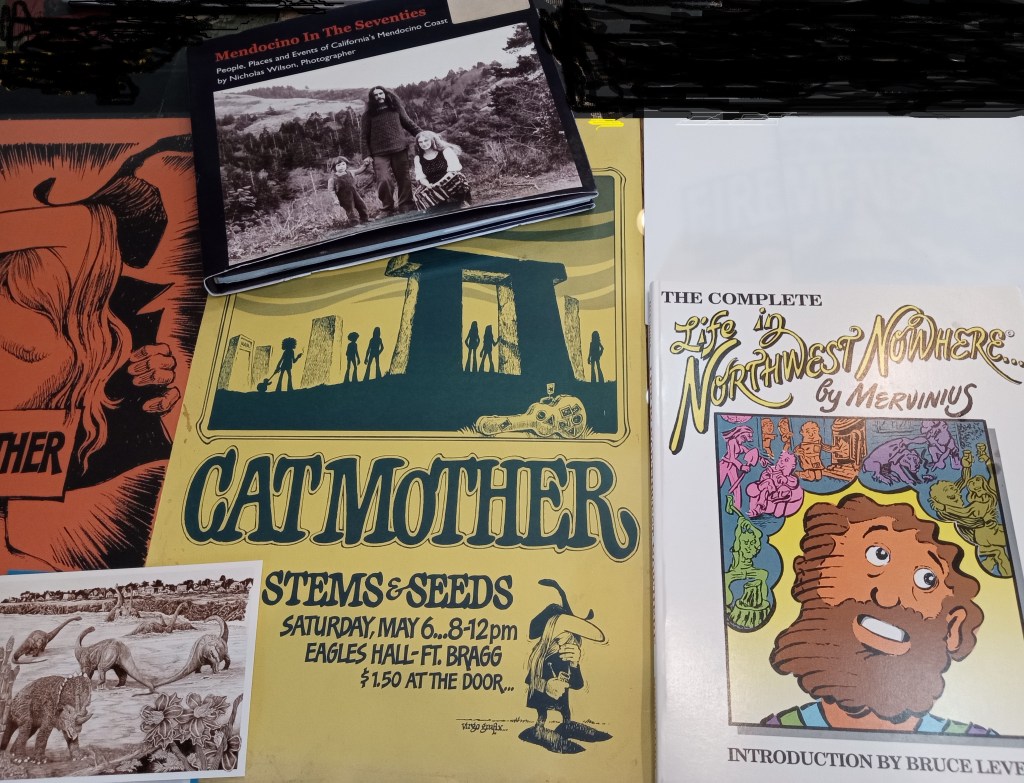 The hippie aesthetic – The Mendocino Beacon

The current exhibition on Cat Mother & the All Night Newsboys, and the posters they inspired, have curators at the Kelley House Museum in Mendocino digging through the archives and finding wonderful depictions of local people and flights of fantasy, produced by illustrators and cartoonists. from the late 60s and 70s. August 14e at 3:30 p.m., “Sunday Afternoon With… the Cat Mother Illustrators” will take you back to the glory days.

Mervin Gilbert will be there, Chuck Hathaway has been invited and, although John Chamberlin is no longer with us, his good friend Nicholas Wilson will talk about John and his art. Wilson is the author of the fine art photography book called Mendocino in the 70swho began his photographic career by taking promotional photos of Cat Mother.

The three illustrators arrived from elsewhere on the Mendocino Coast, and while they may have become hippies when they arrived, they were professional artists and all continued to work commercially. Each man, in his own way, captured the Mendocino vibe of the time.

Take Chuck Hathaway and his vision of Mendocino Bay: his quirky mind imagined the bay full of grazing dinosaurs. This image delights young and old. Hathaway worked as a commercial artist and in music publishing in Southern California before rising in 1970. He was a graphic consultant for the local real estate magazine, helped start the Mendocino Art Center. Arts and Entertainment Magazineand maintained the coastal office of the Mendocino Vine newspaper. He produced art from his business Mendocino Graphics and enjoyed the arrival of computers.

Mervin Gilbert is a New Yorker who transplanted himself from the East Coast to Los Angeles, then to San Francisco, and from there to Mendocino. From the beginning of the 1970s, he made cartoons in the Vine, Big River Newsand Mendocino review, and he created “Mendocino Funnies”, a short-lived comic book series. His “Life in the Northwest Nowhere” cartoons became a book in 1990 and will be on sale at the event. He helped bring the Japanese martial art of aikido to the coast, where he taught it for years. He also performed with the Mendocino Theater Company.

John Chamberlin died in 2013, but left behind posters and t-shirt designs that endure to this day. If a design was needed for a meeting, fundraiser, environmental event or boogie, John was the man to see. Another relocated New Yorker, he had worked in advertising on Madison Avenue. He was also a musician who played with Cat Mother and other local bands. In 2015, at a retrospective of his artwork curated by Kathy O’Grady, old hippies looked at his posters and asked, “Do you remember THAT boogie?”

The museum is proud to have in its archives the works of the three illustrators as well as those of Nicholas Wilson, and happier still to host the Sunday afternoon discussion of the cartoonists of the 1970s in Mendocino. The public is invited to attend for $7; Kelley House Museum members pay $5. Masks are preferred, please. Call 937-5791 for more information.

The Kelley House Museum is open 11:00 a.m. to 3:00 p.m. Thursday through Sunday. Walking tours of the historic district depart regularly from the Kelley House; for the schedule of visits, visit www.kelleyhousemuseum.org.